For many years now my group has used Transcraneal Magnetic Stimulation (TMS) to treat autism. We had the distinction of having the first published article on the subject, and have treated more patients in clinical trials than anybody else in the world. Our idea was judged as meritorious by the NIMH and I received a EUREKA award for the same.  It may therefore be of interest to know that contrary to what I was told and advised by both colleagues and our university officials I never pursued taking a patent on the idea.Since it was my original idea and I had collected data regarding both safety and efficacy this seemed to many a feasible idea. The reason for not pursuing a patent was my desire to make the method available to all patients without them having to pay a surcharge based on a patent. We also did not want to stifle the progress of research in this area.  At least on my part, I have never charged any of our patients for the TMS treatment or any associated interventions.

An interesting side note to my story is that I had made my ideas and data on TMS and autism the object of several academic lectures before pursuing their publication. Not long after one of these lectures I received a call from a business developer from another institution. He was in-charge of commercializing the efforts of their autism center and told me about some of their ventures. To say the least many of his efforts were quite naïve. What really sparked my attention was his insistence on acquiring information regarding my use of TMS in autism. After a long sales pitch and more than one telephone conversation it was obvious that he wanted to patent my idea, but did not have any studies on the subject! I was asked to partner with his commercial venture (belonging to another academic institution), which I refused to do. The chutzpah of the individual!

The basic premise for the use of TMS in autism spectrum disorders is that patients have deficits within the modular organization (also called minicolumns) of their cerebral cortex. Under normal circumstances signal processing within these cortical modules is kept within the center of any given module by a group of surrounding inhibitory cells. According to some investigators these inhibitory cells provide a “strong vertical flow of inhibition” or a “shower curtain of inhibition”. In autism, a faulty inhibitory surround allows for the signal to escape and excite surrounding minicolumns. The hyperexcitable cortex of autistic individuals usually works under a “rich get richer scheme”, that is, a relentless cascade of amplification that makes it difficult to differentiate signal from noise. The resultant hyperexcitability also lowers the threshold for seizures to become manifest. It is not surprising that by puberty about one third of autistic individuals have had at least two seizures and comply with criteria to diagnose epilepsy. 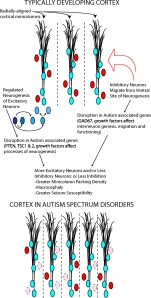 Figure: Schematic illustration of minicolumns in neurotypicals (at top) and autistic (at bottom) individuals. Minicolumns are thinner and some of the inhibitory cells (labelled in red) are missing. Illustration from Vaccarino Frontiers in Neurogenesis. 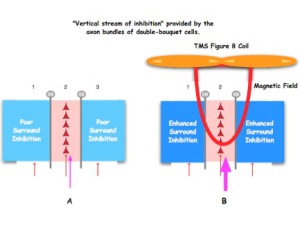 Figure: The surrounding shower curtain of inhibition is faulty in autism (left panel).  It is hypothesized that using low frequency TMS helps strengthen the inhibitory surround of minicolumns.

At present the use of TMS in autism spectrum disorders has not been approved by the FDA.  This means that its use remains experimental or as it is called “off-label”.  According to the FDA off-label refers to the use of drugs and/or devices for other than their approved use. Many insurance companies won’t reimburse the cost of using a device when the same is off-label. Data for research regarding off-label use of a devise can be collected from patients but it requires an investigational device exemption (IDE).

Clinical evaluation of devices that have not been cleared for marketing requires:

Note: Unless exempt the IDE must be obtained before the research is initiated. Without an IDE the equipment per se can’t be shipped legally.

Since the FDA regulates not only the use but the also the marketing approval of drugs and medical devices, these products can only be advertised for the specific use(s) the FDA has cleared. This means that active promotion (including brochures) of devices for off-label use with the intent of making money goes against FDA regulations.

In a similar way the FDA has stated that a sponsor, investigator, or any person acting for or on behalf of a sponsor or investigator shall not commercialize an investigational device by charging the subjects or investigators for a device a price larger than that necessary to recover costs of manufacture, research, development, and handling (see http://bit.ly/15MGEm0 ).

In summary, the use of TMS in autism spectrum disorders remains experimental and has not been approved by the FDA for this purpose. Its use for research should be approved by an Internal Review Board (IRB) or equivalent organization that is able to supervise the ongoing clinical trial.  In the meanwhile the distribution of material for the purpose of advertising its use or commercializing the effort is prohibited by the FDA.

Addendum 9/24/2013: It should be very apparent that I am very protective about my patients as well as the proper use of TMS.  Unfortunately based on my work other physicians have taken the opportunity to establish private ventures commercializing the technique for ASD. This is premature and certainly runs into problems with federal regulations in this country. A similar and complementary opinion can be found at http://bit.ly/17zXXpv ).