Low carbohydrate diets create fuel metabolism by using fatty acids and ketones while minimizing glucose utilization. In a low carbohydrate diet the body consumes the available blood glucose and then depletes glycogen stores in the liver. If the low carbohydrate intake is due to starvation; then, after glucose depletion, the body will start breaking down proteins from muscles. This breakdown would include the heart (cardiac muscle is a specialized type of muscle tissue) thus leading to arrhythmias and/or cardiac arrest. Protein breakdown releases amino acids that are then transformed into glucose by the liver. However, in the presence of fat reserves, the body uses these as an alternate fuel supply instead of consuming the protein in your muscles.

The brain comprises 2% of our body mass but utilizes 20% of our energy. Most of the energy comes from glucose using 100-120 gms of glucose per day. About 25% of total body glucose consumption occurs in the brain. Fatty acids themselves can’t be used as a fuel source, they need to undergo a process called oxidation. The resultant molecules of this oxidative process are known as ketone bodies and they are produced in the liver. Ketone bodies include beta-hydroxybutyric acid, acetoacetic acid and acetone. Becase two of the ketone bodies are acids, their accumulation results in a metabolic acidosis. The condition is therefore refered to as ketoacidosis. These ketones can cross the blood brain barrier and feed the brain. It is an efficient system. 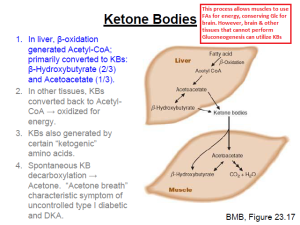 Ketosis is usually established when a diet low carbohydrates and moderate amounts of protein (approximately 100 grams per day) is followed for 3 to 7 days. This type of diet has been proven safe and effective in treating metabolic syndrome, and type 2 diabetes mellitus. It is often implemented as part of the presurgical intervention for the morbidly obese, especially those with large (fatty) livers. In addition, some types of cancer are glucose-dependent and/or insulin-sensitive, so avoiding glucose metabolism and lowering insulin levels may be beneficial in reducing or even eliminating the underlying tumor. Preliminary human prospective studies are being done at present to evaluate carbohydrate diets for the treatment and prevention of some types of cancer (see National Cancer Institute’s clinical trial: http://1.usa.gov/1vV3HW5).

Low carbohydrate diets (e.g., Atkins) also have no fluid or calorie restrictions. The intake of fats is encouraged but there is no restriction on proteins. Some amino acids in proteins can be converted into glucose by a process known as gluconeogenesis. Since glucose can be produced from the protein in the diet, this source of carbohydrates is restricted. Protein is provided only in sufficient amounts for body growth and repair. The traditional ratio of fat to combined protein and carbohydrates is 4:1. 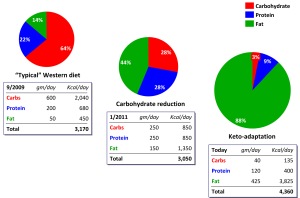 A moderate reduction in the amount of carbohydrates in your diet may be beneficial to your health, but the same may not be considered ketogenic. In addition, unsupervised low carbohydrate diets may have side effects like an increase in serum uric acid levels, an increased risk for developing kidney stones, causing cardiac arrhythmias, acidosis, and making preexisting kidney problems worse. Sometimes a depletion of glycogen in muscles and liver and can make you feel tired and alter your calcium balance (there is no milk or milk products in a low carbohydrate diet).

Under ketosis, ketone bodies that accumulate may be eliminated in the breath which then acquires the fruity odor of acetone. Clinically, the concentration of blood ketones is generally inferred from their concentration in the urine. This is why many diabetics follow their ketosis by using a dipstick with chemicals that allows measuring ketone bodies in a sample of urine.