Dravet syndrome is the eponym for a particular type of severe epilepsy that begins between the first and fifth year of life. It was named after the French physician Dr. Charlotte Dravet who first described the condition in 1978. If you like obscure names, the condition used to be known as the severe myoclonic or polymorphic epilepsy of infancy. Estimates for prevalence for this rare condition vary between 1:20,000 and 1 in 40,000 births.

The first seizure in Dravet Syndrome is often associated with a febrile episode, otherwise the child’s development prior to seizure onset tends to be normal. A family history of febrile seizures is present in 15 to 25% of cases. As the child grows older, he/she may have seizures triggered by changes in body temperature (e.g., infection) and flashing lights (photosensitivity). Initial electronencephalographic examinations may be normal. It may not be until the second year of life that abnormalities in the EEG (e.g., spikes or polyspike-wave paroxysms) appear. MRI and metabolic studies are normal.

Myoclonic seizures manifest themselves as involuntary muscle jerks that can affect any part of the body. However, with age, other seizure types may become manifest, e.g., absence, atonic, partial seizures. Unfortunately the seizures in Dravet Syndrome are considered refractory to medication treatment. Some anticonvulsants, like lamotrigine or carbamazepine, may even provide for harmful side effects to the patient.

Please click on images you want to make larger.

Children do not outgrow the condition; rather, from the second to the fourth year of life there may be a progressive decline of the subject’s functioning. During this regressive phase children loose their developmental milestones and mental capacity. They ultimate tend to stabilize by around 4 years of age.

Approximately 85% of affected children may reach adulthood. Dependecy in adulthood is widespread. According to a recent study only 3 out of 24 adult individuals with Dravet syndrome lived independently (Genton et al., 2011).

The condition is caused by a mutation of the SCN1A gene which leads to abnormal functioning of the sodium ion channels in the brain. This mutation nearly always arises “de novo” meaning that it is not inherited or passed from parent to child. 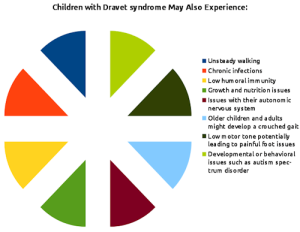 In a recent study of 37 patients with Dravet syndrome of them (24.3%) met criteria for autism (Li et al., 2011). Although most individuals with Dravet syndrome suffer from mental retardation, deficits are more severe or profound in those that also exhibit autistic features (Li et al., 2011). According to the authors of this study all Dravet Syndrome patients with autism manifested speech delay, lack of emotional reciprocity and narrow interests.

A significant percentage of individuals with Dravet Syndrome also exhibit symptoms suggestive of syndromic autism. It is a rare condition with many teaching points for those interested in autism. In it, a genetic condition that impairs cell migration and gives rise to focal malformations of the cerebral cortex, provides for normal developmental milestones until an environmental exigency (e.g., an infection causing fever) gives rise to seizures. From there on the child exhibits a regression, often expressing autistic symptoms, which stabilizes by about 4 years of age. Although the symptoms seem to stabilize the seizures and acquired losses remain.

For those interested in learning more about Dravert syndrome I am including a link by Paulo Caserta to a short video entitled, “Ciara’s Light” (http://bit.ly/1C10Y1j)