Oxidative stress, defined as an imbalance between the production of reactive oxygen species (ROS) and the body’s ability to detoxify these chemicals or repair the damage caused by them, has been demonstrated in the peripheral tissues of children with autism. Increased nitric oxide levels in red blood cells and higher antioxidant enzyme activity have been reported in autistic patients. Higher plasma and red blood cell levels of pro-oxidant nitric oxide have been documented in autistic individuals relative to neurotypical children. Two independent reports document that the antioxidant enzymes, glutathione peroxidase and superoxide dismutase, are lower in autistic children relative to neurotypicals. Finally, evidence for chronic brain inflammation, and increased lipid peroxidation and reduced antioxidant activity in autistic children has been recently reported.

Chemically, oxidative stress is associated with increased production of oxidizing species or a significant decrease in antioxidant defenses. Glutathione is a cys-containing tripeptide that serves as the primary determinant of redox status (i.e., the transfer of electrons between molecules) in all human cells. Significantly lower levels of glutathione peroxidase, an antioxidant enzyme, and plasma glutathione, as well as higher ratios of oxidized glutathione to reduced glutathione, have been reported in autistic children and indicate that a disruption in antioxidant defense mechanisms may be associated with the disorder. If glutathine synthesis is inherently limited in autistic children, it could provide a biochemical explanation for the increased sensitivity to infections, gastrointestinal pathology, impaired detoxification, and neurologic pathology that are associated with both glutathione depletion and the autistic phenotype.

The brain is particularly vulnerable to oxidative stress during early development because it has low levels of antioxidants, high-energy requirements, and a high fat and iron content. In effect, the brain utilizes 20% of oxygen consumed by the body yet comprises only 2% of body weight. High-energy demands from oxidative metabolism plus a high concentration of polyunsaturated fatty acids and low antioxidant capacity is thought to render the brain more vulnerable to oxidative damage than most organs. Astrocytes, a supporting cell in the brain, serve as reservoirs for glutathione, and provide the cysteine necessary for thiol metabolism in human neuronal cells. Postmortem immunohistochemical studies have demonstrated that oxidative damage, evidenced by lipid modification, is localized primarily in the white matter of patients with autism, suggesting that axons may be the sites of primary oxidative damage within the brain of these individuals. This evidence is particularly relevant to the global underconnectivity deficits demonstrated in ASD, and may account for these white matter changes from a molecular perspective.

The reality for thousands of parents of autistic children is that medication options for their autistic children are extremely limited, often not effective, and may be associated with unwanted or toxic side-effects; e.g., weight gain with risperdal or liver toxicity with other psychotropic drugs. As a result, many primary care providers who see large number of autistic children have begun to recommend a variety of nutritional supplements and alternative treatments. Many of these interventions are difficult to implement in autistic children because of sensory issues and obsessive-compulsive behaviors that manifest as rigid and self-limited diets.

My group concluded a study using intravenous glutathione to see whether this therapy would alter plasma cytokine expression and improve behavior in children with autism.
Our data indicate that symptom severity and plasma cytokine levels do not significantly differ between autistic children who receive either intravenous placebo or glutathione administration. Exogenous administration of glutathione has been shown to have a very short half-life in human plasma, with rapid elimination and total clearance within approximately 10 minutes. Thus, one possibility as to why cytokine expression levels were not affected by exogenous glutathione administration in this study could be that the tri-peptide was simply unable to permeate cell membranes due to it being metabolized so quickly within the bloodstream. 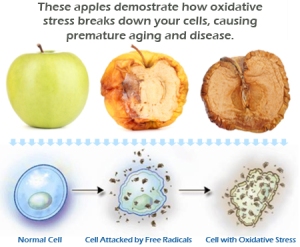 5 responses to “Oxidative Stress and Autism”