Paro is a very cute baby seal robot that responds to the emotions of its handlers by interpreting tactile and auditory stimuli (https://www.youtube.com/watch?v=oJq5PQZHU-I). Its name is derived from Personal Robot. It was developed by the National Institute of Advanced Industrial Science and Technology and marketed by Intelligent System in Japan and Robots US, Inc in North America. It is a light plush toy with a long battery life designed exclusively for therapeutic purposes. It remembers if it has been stroked and tries to procreate those situations that make it more likely for it to be stroked by moving its tail, opening and closing its eyes, and uttering sounds such as “heeee” or “huuuuu”. These responses enable it to simulate emotions such as happiness, surprise and anger. According to its manufacturers Paro gradually learns to develop a personality that the owner likes. Clinical trials in different institutions have shown that robotic therapy has a similar effect as animal therapy. In the nursing environment patients with dementia that often became agitated tend to calm down when in contact with Paro. Physical restraints and strong drugs as neuroleptics in this regard are replaced with a smile and a feeling of well-being. In the United States Paro has been cleared by the FDA as a class 2 medical device and carries the hefty price of around $6,000.

Self-operating machines such as automata have been known for a long time ago. Leonardo DaVinci developed a humanoid automaton in the form of a knight around the year 1495. ASIMO, the most advanced humanoid robot in existence, was a project started by Honda to develop a walking robot. Although not at a stage of R2-D2 or Astro Boy, it can comprehend and respond to simple voice commands and recognize faces from a select group of individuals. Other companies like Robomatter, Vex Robotics, LEGO, and Arduino are presently making robots for educational purposes. These products motivate students about computer sciences in specific and STEM (science, technology, engineering and mathematics) subjects in general.

Social robots have the function of interacting with humans. It is a field that combines engineering with psychology. Do social robots exhibit initiative, that is, are they capable of starting an interaction with a human person? Do they have a personality? Do they provide more than just a language exchange? Think of Siri, the voice search engine on iPhones. The following is a short cut and paste from an article by Judith Newman published in 2014 (http://www.nytimes.com/2014/10/19/fashion/how-apples-siri-became-one-autistic-boys-bff.html?_r=0)

Just how bad a mother am I? I wondered, as I watched my 13-year-old son deep in conversation with Siri. Gus has autism, and Siri, Apple’s “intelligent personal assistant” on the iPhone, is currently his BFF. Obsessed with weather formations, Gus had spent the hour parsing the difference between isolated and scattered thunderstorms — an hour in which, thank God, I didn’t have to discuss them. After a while I heard this:
Gus: “You’re a really nice computer.”
Siri: “It’s nice to be appreciated.”
Gus: “You are always asking if you can help me. Is there anything you want?”
Siri: “Thank you, but I have very few wants.”
Gus: “O.K.! Well, good night!”
Siri: “Ah, it’s 5:06 p.m.”
Gus: “Oh sorry, I mean, goodbye.”
Siri: “See you later!”

It is now known that robot therapy helps some children with autism learn social sills (https://www.autismspeaks.org/science/science-news/robots-autism-co-therapists). In many cases the interests of autistic individuals gravitate towards gadgets making an interaction with robots easier. Robots learn the name that you give them and teache individuals about social norms. Therapists can integrate social and communication aims in the robot’s program to encourage children to respond adequately to social questions (e.g., How was school today?). They can teach about social communication through body language (e.g., changing body posture, position of ears and eyes) and help reduce social stress when receiving therapy. Researchers are not studying the possibility of using robots as consultants, joining them on therapy sessions from remote locations.

At present, robots do not replace human therapists but rather remain as assistive devices. Questions still remain as to whether skills learned with the robots are generalizable. Furthermore what type of robot (simple or rather complex) best engages with a particular child may depend on his/her particular special needs. 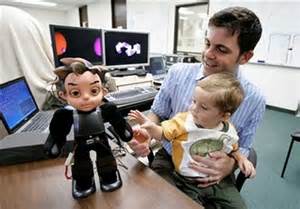