It is sad news to hear that a good friend of the autism community passed away recently. Hans Bogte (June 1951- January 2017) was a Child and Adolescent Psychiatrist who practiced in the city of Maastritcht in the Netherlands. He was a regular attendant at the International Congress for Autism Research (IMFAR) and published many articles related to the clinical aspects of autism including its executive dysfunctions, divided attention capacity, and abnormalities in cognitive flexibility or what may be called, post-error adaptation. Although outside his area of expertise Hans was also very fond of genetics and helped organize various focus groups on the subject. Hans was a Child Psychiatrist by training; however, many of his publications made reference to adults with autism spectrum disorder. Patients never left his practice because they turned 18 years of age. He was a physician for all of their lifetime. Indeed, Hans the best aspects together of  a physician and a scholar.

I came to know Hans at a personal level while he partook in his role as founder and organizer of the Dutch National Autism Congress. Both my wife and I were hosted by Hans while we delivered lectures at his Congress. During the last few years Hans aged precipitously for which he told me he had been sick, but he was feeling gratefull that he was recovering. He had great hopes of helping to organize next year’s (2018) IMFAR meeting which is going to be celebrated in his home country of the Netherlands.

I remember Hans as a gracious and kind man who always took time to enjoy life, primarily the company of his friends. He is remembered by his colleges for his endless passion for his work and compassion for his patients (http://www.mensenlinq.nl/overlijdensberichten/hans-bogte-7142538). As Nelson Mandela said, “When a man has done what he considers to be his duty to his people and his country, he can rest in peace”. He will be missed but remain in our hearts. My deepest condolences to his family. 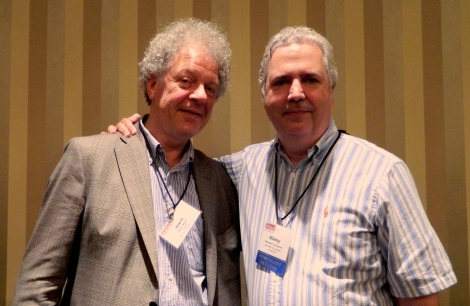 Figure: Enjoying the company of my friend Hans during a recent IMFAR meeting. It will feel very different the next time I attend.