Autistic individuals are prone to obesity even from before they are born. Studies now show that children of women who are both obese and diabetic during pregnancy are three to four times as likely to develop autism. To make matters worse, children born to diabetic mothers are themselves more likely to become diabetics and obese at young ages. This vicious cycle only seems to get worse for autistic individuals as later on in life the effects of inactivity and medications also makes them prone to obesity and diabetes.  It stands to reason that instituting some type of exercise program in this patient population should help forestall future health concerns. This has important secondary benefits, as exercise enhances  learning abilities, as well as our capacity to handle stress, anxiety and depression.

According to the California Department of Education, physically fit kids performed better on academic testing, even when controlling for socioeconomic status. Indeed, according to an article published in the Journal of Sport and Exercise Psychology in 2007 entitled “Physical fitness and academic achievement in 3rd and 5th grade students”, the body mass index (BMI) and aerobic fitness of children is associated with academic performance. The reason for this comes from basic science. In one such study, a group of mice were allowed to exercise in a training wheel while another group of mice were not allowed to partake in this activity. Mice who exercised were better than the sedentary ones at finding a hidden platform in an opaque pool . The mice who exercised had increased “neurotrophins” and bigger brains upon dissection at the end of the study. The area most noticeable changed was the hippocampus; a brain region famously known for its role in learning and memory.  These neurotrophins are not chemicals that carry out signaling but rather, they are chemicals that build and maintain brain circuitry. In other words, neurotrophins are important in maintaining the infrastructure of the brain.

What type of exercise is best for learning? Studies indicate that the best type of exercise for this purpose is that which mixes cardio with complex motor and balance requirements. Figure skating nicely fits the bill; however, I would include salsa dancing as probably my favorite.

Another benefit of exercise is its ability to control the emotional and physical feelings of stress. Exercise works at the cellular level to increase neurotrophins (see above), neurotransmitters, and insulin receptors.  During exercise muscle fibers in our bodies are broken and then pieced back together in a more robust fashion. Exercise even changes the proportion of  different types of muscle fiber, whether fast or slow twitching. The same thing happens with brain neurons and exercise, it makes you grow new cells and connections!

Multiple studies have now shown that rigorous exercise works to reduce anxiety.  According to John Ratey, a psychiatrist and best-selling author, “Going for a run is like taking a little bit of Prozac and a little bit of Ritalin.” Cardiologist Carl “Chip” Lavie has over 70 articles published on exercise and the heart, 11 of which focus on anxiety. All of them have shown marked improvements in mood. Other studies have shown no difference between medication and exercise in their effect on depression. The positive effects of exercise on mood occurs regardless of whether the same happens at home or in a supervised setting.

Exercise should be considered the first stage of intervention in the treatment of any mild mood disorders. Psychologically, it gives the person proof that they can take the initiative to change themselves. In the end, they may begin to feel better because they are effectively doing their own behavioral therapy.  Exercise offers all of the positive effects and none of the side effects of medications.

If you decide to do exercise, remember to be patient. It takes about 3 weeks for antidepressants to work, and an equal amount of time for exercise to cause cells to grow in the brain and establish new connections. Also, there is a minimum amount of time you need to invest for positive effects to emerge. The literature suggests a minimum of 30 minutes 3 times per week, but personally I recommend 30 minutes 5 times per week.

Autism the usefulness of exercise: https://corticalchauvinism.com/2014/09/01/autism-the-usefulness-of-exercise/

Autism and the sedentary life: https://corticalchauvinism.com/2017/10/09/autism-and-the-sedentary-life/ 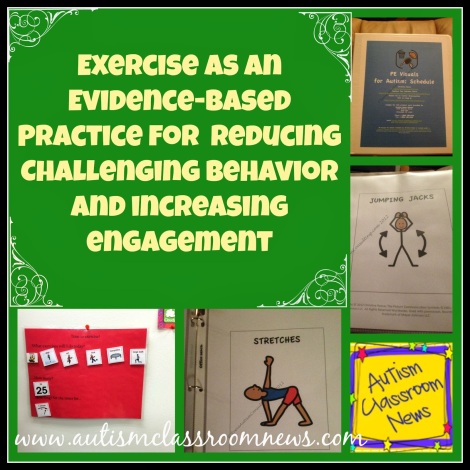 10 responses to “Exercise and Autism”