Many twin studies have been performed in order to explore the role that environmental and genetic influences may have in the development of autism. Studies usually entail a comparison of the expression of traits or diagnosis between monozygotic (identical) and dizygotic (fraternal or familial) twins.  In autism, the chance of one identical twin developing autism, if the other one has it, varies from 70 to 95 percent. In fraternal twins the overlap is definitely smaller but significant.  Other studies on infants that had at least one older sibling with the diagnosis of autism spectrum disorder have found that 1 in 5 babies are affected.  These studies emphasize the role for genetic as well as environmental influences in autism.  Moreover, it is the prenatal environment, more so than the postnatal environment, that appears to have a role in the genesis of autism.  This is the realm of epigenetics, a concept that I will introduce to the reader in this blog.

Data on the incidence of twinning shows that it happens about once in every ninety births.  Dizygotic twins account for 70% of cases but may vary according to ethnicity and geographical location.  Monozygotic twins are identical and their rate is stable- occurring in multiples of 3 or more in 0.03% of all births. Monozygotic twins could be considered a “birth defect” in the sense that the zygotic mass splits abnormally giving rise to two embryos from one fertilized egg.  By way of contrast, dizygotic twins develop from separate eggs, each one fertilized by its own sperm. Although very rare, some twins may have separate biological fathers (superfecundation).

Depending on when the cleavage of the zygote occurs, the ensuing twins may or may not share the same placenta and amniotic sac.  Changes in either of these structures alter the intrauterine environment with repercussion that may be observed only later in life, e.g., diabetes, coronary artery disease.  Indeed, in some studies, placental thickness is an important predictor of hypertension in middle age.  Exposure to certain toxic substances during gestation, such as pesticides and phthalates (found in plastics), or drugs such as terbutaline and valproic acid can increase the risk of having a child with autism.

Epigenetics is the branch of biology that studies the interactions of genes and their environment with the end result of bringing a phenotype into being (note: the term epigenetics itself means above the genome). A more recent definition for epigenetics is the study of changes in gene function that are stable and potentially heritable.  These changes either modify the structure of DNA without altering its sequencing (e.g., methylation, histones) or interfere with RNA expression. 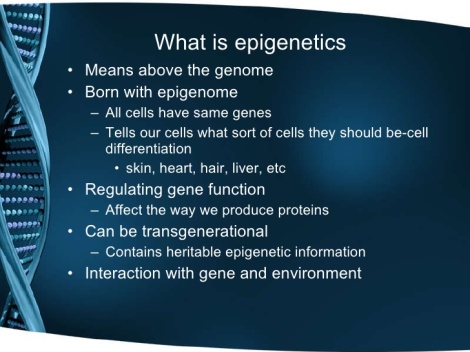 The epigenome is the sum of stable alterations of DNA and chromatin across a region based on DNA methylation or other processes (see above).  Unlike the genome, the epigenome is highly variable between cells and fluctuates in time even within a single cell (Suzuki and Bird, 2008).  Epigenetic disease may be far more common than we think. Triggers for epigenetic changes include hypoxia, drugs (e.g., valproate), endocrine compounds, maternal diabetes, early life stress (e.g., loss of parent, maltreatment, low parental care), or maternal depression in the third trimester.

Epigenetics opens new windows to the study of autism. Furthermore, these factors are modifiable and offer far greater prospects than genetic engineering for possible therapeutic interventions and prophylaxis.  In addition, epigenetics seems to play a major role in a vast range of disorders, e.g.,  PTSD, allergies, heart disease, metabolic syndrome, etc.  This means that we should keep our eyes open as we study epigenetic influences in other conditions for lessons that can be applied to autism.

3 responses to “Twinning and Epigenetics in Autism”